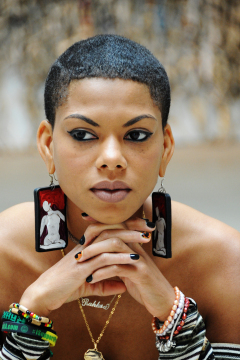 Rahkua is a force to be reckoned with, known to captivate audiences and silence crowds within those first crucial moments of stepping to the mic. She has been singing since the age of 3 but really began to discover her sound and passion for music with the release of her singles "You Know (When I Hit the Scene)" and "Shake It Off" in 2011.

After graduating New York University with her BFA in Drama, Rahkua relocated to Los Angeles, CA where she began to further develop her sound. Her debut album, "Love, Loss, Lies" was released May 2013 and she has since performed all over LA including the House of Blues, Club Clobra, The Crest, Club Tatou and others. She also has opened for several artists, most notably CeeLo Green with Goodie Mob at Playhouse in Hollywood, Kellita Smith at Geisha House in Hollywood, and Travis Porter at Styles in her hometown of Jackson, MS.

Rahkua has always written her own music as well as for other artists. Her writing is the perfect synthesis of heartfelt honesty, daring surrealism, and outrageous cynicism while staying relatable and universally applicable. Rahkua's lyrical ability was recognized in her senior year at NYU where she co-wrote theme song "Da Kink" with Sweet Honey & the Rock member, Carol Maillard for internationally renown musical, "Da Kink in My Hair".

She has been most inspired musically by Beyonce, Prince, Eminem, CeeLo, and Nina Simone as well as by myriad genres and languages (English - old & new, French, Spanish, Portuguese, Hebrew, Swahili, etc.) that she has sung in all over the US and abroad.

Rahkua is currently working on her second solo project, FriendZone. In the meantime, she has released Christmas record, "A Very Merry Christmas" and group project "Stripped" EP with Christian/Pop/Rock band, "Stripped". Rahkua has just returned from her second voyage to the motherland with Project Africa: LA in Johannesburg, South Africa where she performed at Soweto Theatre curated by Roots Grown Deep with the Global Education Exchange Coalition as well as Kliptown People's Place Visitor Centre, and Outtie Cafe.

Rahkua has relaunched impactful Project Africa campaign and you have an opportunity to get involved! This year, the Back II Afrika collaboration between PALA and Rap Sessions is travelling to Johannesburg, South Africa and sponsoring performing artist, Cleo aka HippieTrapGoddess. Join the movement: gofundme.com/projectafricareturn

Performance at The World Stage

Get ready for an awesome night of poetry, live art, food and music this Friday at The World Stage. Rahkua will be blessing the mic and hopefully you'll be there too. Check out the Facebook Event here: https://www.facebook.com/events/256342061209408/

Out of the Closet

Free and open to the public

Project Africa is raising money to get to Ghana this summer for the biennial Pan-African Arts and Culture Festival. Be a part of helping bring this quest to life!
The official music video for Rahkua's Love, Loss, Lies song, "I-N-S-A-N-E" will debut at the concert in addition to live performance from: Rahkua and guest performances from Red Planet, Love, Silas, Kerry Thomas, and J. Skyy.

If you missed out on the first one, you definitely don't want to miss part 2...and if you got to attend the first, we're coming back bigger and better! Project Africa: LA has teamed up with Blu ENT, Anerrick Management and Media Extreme Team for an unforgettable night of great music and you might walk away with the love of your life....AND there is an added treat as hilarious comic Blu Lindsey hosts this summer epic Les Nuits de Rêve Pt. 2! It'll be some great fun and entertainment, raising money for a worthwhile cause.
Get your tickets early!
To find out more about Project Africa, visit www.igg.me/at/pala.

Eagle Wings Enlightenment and We Can Foundation presents

CELEBRATING ELEVATING THE PIONEERING SPIRITS OF THE AFRICAN AMERICAN WOMAN

Their Struggle, Success, and Legacy

Do you love to play or watch chess? Come out on a beautiful Sunday to the historic Leimert Park, 7/12/15 from 12-4pm for a great game of chess! There are some awesome prizes, music, and giveaways that you won't want to miss! Light refreshments will be provided. Email projectafricala@gmail.com for more info. Registration/Check-in begins at 12 Noon and the first round will begin at 12:30pm PDT!

Rahkua will be performing around 3pm

Rahkua has made it to South Africa and will be performing on the GEEC Gift of Light show at Soweto Theatre!

Rahkua will be performing her new single, "Beautiful"! Come enjoy the show.

Come out for some pre-Valentine's Day music vibes featuring a date auction with some beautiful artists.

Maestro the Vocalinist's bi-monthly music concert will feature RAHKUA for the April 8 show with live band!

STEAM THE BLOCK IN H-TOWN

"A Creative Combination of Cultures"

Update Required To play the media you will need to either update your browser to a recent version or update your Flash plugin.
Download Download
Back
You Tube